Home / What's On / Past / Breaking The Castle

“So now you have the sounds, the visuals, the feeling...this feeling in the stomach, because you know everything is about to go away.”

David can’t get enough, of anything. Alcohol, drugs, women, gambling – whatever it takes to escape the bark of the black dog. Consumed by an overwhelming feeling of never belonging anywhere, days and nights are lived through a thick haze of drugs and alcohol.   This bender could be his last, but he doesn’t care – there are worse things than death.

Then David is thrown an unlikely lifeline. Finding himself in the mountains of South -East Asia he is offered a chance at redemption - but he will need to confront his inner demons, traumas and secrets long buried in his psyche.

Visceral, fierce, and uplifting Breaking The Castle is an exquisitely rendered gripping tale and performance from creator Peter Cook as a man yearning for connection.

Warnings: Theatrical haze and mild incense in use during the show.

Written and performed by: Peter Cook 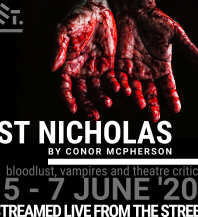